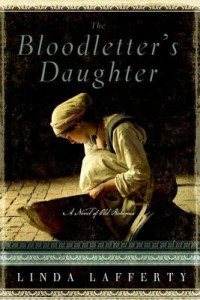 Having lived in Prague and travelled around the area quite a bit, I felt a special connection to The Bloodletter’s Daughter, a historical novel by Linda Lafferty that uses the legend of  Don Julius,  the mad bastard son of Emperor Rudolph II as the backdrop to the story of a young woman sold out by her mother, the owner of a bathhouse and doted on by her father, a bloodletter.  Interwoven through this tale are themes that are just as provocative today as they were then. A biggie in this book is the struggle between science and faith.
I think I’m a fairly enlightened person. I accept evolution. I recognize natural phenomenons as the result of various actions coming together to create a reaction. I know that the planets revolve around the sun. And yet, I have faith. Lots and lots of faith.
For all my modern scientific acceptance, I can’t help but put my faith in the so-called universe. I believe in signs, I trust my instincts and intuition, I believe everything happens for a reason, even if we can’t understand those reasons. And that, I think, is at the root of the struggle between science and faith. How do we explain the things we can’t or don’t understand? Sometimes science doesn’t have answers. Sometimes the scientific reasoning is too hard to wrap our heads around. So, we invent ways of understanding that are based in mythology, superstition, mysticism. Every creation tale is an excellent example of this.
Honestly, I don’t even know what I’m getting at here. My faith, in the religious sense, is something that  I struggle with. But my faith in the mystical powers of the universe rarely wavers. I witness and experience the mysterious workings of the world often, if not everyday. When my Grandpa Sol was convalescing at the Hebrew Home this past Spring, right in my very own neighborhood, after being estranged from him for many, many years, I immediately recognized it as a sign. I saw him nearly everyday during his time there, before my husband and I drove him upstate to my mother’s house. He died shortly thereafter.
Every summer, my Grandpa Mike travels to Albany, along with my aunt and uncle, and cousins, from Florida for a big family dinner. And so it went this past summer. My 93 year old grandpa came up and while he was here, he didn’t feel well so he was taken to the hospital. Because he lives in Florida, I don’t see him very often, and we don’t talk on the phone… because I’m deaf and he’s deaf and it’s never a good idea, a phone conversation. On my way home, I stopped by the hospital to see him and say goodbye. I was alone with him for 45 minutes, the longest I have ever been alone with him. We had a nice, funny conversation. He died not too long after that.
I truly, truly believe it was the universe that orchestrated these opportunities. Someone up there was tying up loose ends for us. I think I will be forever grateful that I had this chance to say goodbye to my two last living grandparents. It sounds hokey, I know, yet I cling to this belief in the universe because it is how I make sense of the world, it is how I cope with the unknown. It’s really not so hard to understand then, the fear of medicine and science that serves as the undercurrent for The Bloodletter’s Daughter or that once upon a time, it was believed that the sun revolved around the Earth.

Inspired by a real-life murder that threatened to topple the powerful Hapsburg dynasty in the 17th century, The Bloodletter’s Daughter imagines how one young woman holds more power than she thought possible.  Join From Left to Write on September 25 as we discuss the The Bloodletter’s Daughter. As a member, I received a copy of the book for review purposes. All links are IndieBound affiliate links, which means I get a cut if you buy the book, using one of my links.

6 thoughts on “A Believer.”