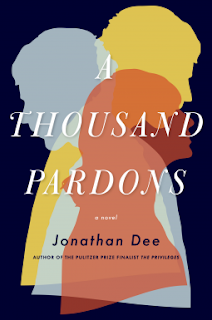 It’s funny… the title of Jonathan Dee’s book, A Thousand Pardons, did not register with me at all. I did not look at the synopsis of the book before I started reading. It was only until after that I realized that the theme of the book was supposed to forgiveness. In my day (that would be the ’90s, ahem), reader response was the prevailing method for teaching literature. Accordingly, reader response is my default, especially when the setting and plot details hit home.

So I read A Thousand Pardons as a reader from Upstate New York, who lived in New York City. I read A Thousand Pardons as a woman with complicated, unseen layers in her marriage. I read A Thousand Pardons as a housewife that has been out of the workforce for as long as she’s had children.
The writing is breezy, the characters are well-developed and the plot is the stuff of Hollywood. There is nothing too deep going on here, but a reader is drawn into the story, and finds herself cheering the characters on. Even the pitifully at fault Ben is a sympathetic character. His fall from grace makes a reader cringe in the way that a horror movie heroine makes you shake your head and yell at the screen, “No! Don’t open that door!” The reader sees disaster coming before he does, and wishes Ben had the benefit of hindsight.
Helen, on the other hand, rises from the ashes of her marriage with commendable fortitude. The reader knows that Helen has a small flame burning inside of her, that is at danger of being suffocated by her powerlessness over the unravelling of her marriage. The separation from her husband breathes new life into the fire and fuels her transformation into a woman with control over men.
Does any of this resemble my own marriage? Not in the least but the discontent of a housewife, hidden or looming large, is a well-known and familiar feeling to women, whether through experience or exposure. For that reason, I blew through this book, murmuring in sympathy with Helen and telling her, “I know what you mean, girl.”
I received a free copy of this book from Netgalley, for review purposes. Links to the title are affiliate links which means, if you buy the book using my link, I get a cut from IndieBound.