I’m a latecomer to borscht. Growing up, I would see the stuff in jars in the supermarket and think, “Gross!” But the summer I turned 16, I was in Israel, and spent a weekend hosted by a family in Haifa. I was served cold borscht, with a generous dollop of sour cream and a few slice of white bread. I turned a corner then but didn’t have borscht again for a long time. Years later, I visited my friend Yelena and her family in Toronto. Her mother, born and raised in Russia,  made a green borscht and packed it up for my train ride back to New York. This was the day of the Great Black-Out of 2003, and I was so grateful for that soup as my train sat in Utica for hours, waiting for electricity. I still think about that soup all the time.

The other day, I got hit with a craving for borscht. I was searching for winter soup recipes online, and saw a picture of borscht. Since then, I haven’t stopped thinking about it. I googled around for borscht recipes and discovered that there are as many borscht recipes as there are people. Some of the recipes were incredibly time-consuming and had ingredient lists miles long, in stark contrast to the recipe found in The Book of Jewish Food, which calls for 5 ingredients. I came up with a happy medium, creating the recipe below. Delicious, if I do say so myself and judging by the shout-out I got from my husband on Facebook, it’s not just me! 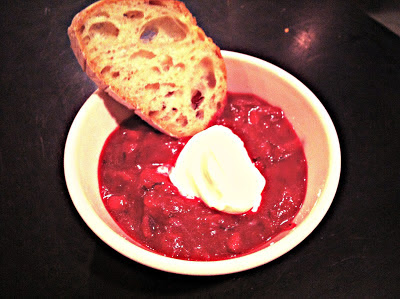 Even though borscht is an old-world classic Russian recipe, my grandmother never made it, as far as I know. She did, however, make delicious stuffed cabbage and that is next on my list of winter cravings to satisfy. Yum.

4 thoughts on “Borscht Under My Belt”