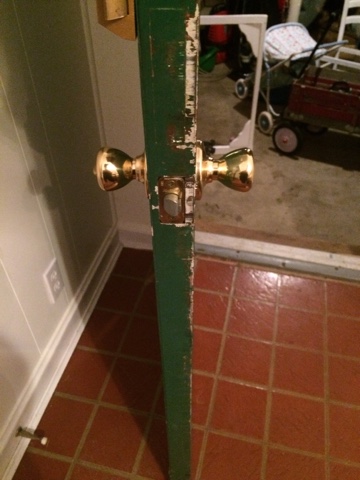 This just looks like a regular old door knob, right? A month ago, the door knob was jammed and wouldn’t turn, preventing access to the garage. Unable to fix it,  I ended up channeling all my frustration into banging the heck out of it with any tool I could grab. The end result was that we were left with a convenient portal through which bugs could travel into the house. No bueno.
Henry was home for a little while but I never got around to nagging him to fix it, and so the bug portal remained.
Before I met Henry, I was an independent city girl living the city life. I did almost everything on my own. I moved furniture, I plunged toilets, I fixed broken things (one time, I replaced a ballc*ck. Heh heh.) Then I acquired a man and promptly outsourced all such fix-it tasks to him, because why not? Being taller and stronger, and more attuned to problem-solving than I was, I was more than happy to relinquish handyman tasks to him.
But a funny thing happens when you do that. You start to lose confidence. You forget that you’re perfectly capable of fixing stuff. You get lazy. But with Henry gone for months at a time, things either get fixed or they don’t. Two lightbulbs blew out and stayed that way for weeks. The bug portal remained open.
The thing was either going to get fixed or not. I was tired of looking at the gaping hole in the door and tired of the bug parade. Off to the hardware store to get a new door knob, and reclaim my independence. (My niece: Daddy can do it for you. Me: Or I can do it. Humph.)
Fifteen minutes and the deed was done. High on that accomplishment, I went ahead and replaced two light bulbs, one of which required a ladder, so GO ME.