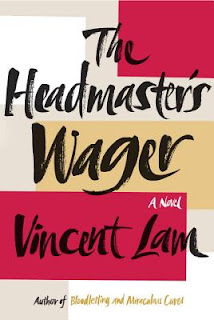 I’ve written before about my reluctance to face other people’s realities. I do this by not watching the news, skipping over articles in the paper, scrolling past news stories on Facebook. I mean, it’s not like I don’t know. And it’s not like knowing more is going to suddenly spur me to action.

Actually, that’s not true. After I watched Half the Sky, the first thing I did was offer myself as a volunteer to Pathways Togo. I’ve been helping them with their social media presence and outreach. A small thing but it helps to spread the message. A little can do a lot.

But for the most part, I block it all out. The anxiety of knowing, the guilt over feeling lucky, does me no good. And I have been very lucky. I lived an almost charmed life. Is it always easy? No. But easy is relative. I’ve never wanted for much, I have good friends and good family. My worries, as they say, amount to First World Problems.

This is where I sympathized with Percival, the main character in this month’s From Left to Write selection, The Headmaster’s Wager. Even though the stakes are higher for Percival, a Chinese ex-pat living just outside Saigon, I completely understood his subconscious refusal to pay attention to the rumors and stories swirling around Saigon about Chairman Mao’s campaign in China. In the end, his determination to keep his head in the sand became his downfall. He found himself trapped between a rock and a hard place because he stayed in the present and didn’t allow himself to consider the future, unless it was a rosy one.

Maybe it’s only human? I’m the same in many ways. It’s easier to think about now and live for now, than it is to do the hard work that will allow me to ride out whatever the future brings, good or bad. To paraphrase Peter Drucker:

It’s one thing to know it; it’s another thing to act on it. I’m a slow learner sometimes. Even though I’ve already felt the repercussions of my past failures to plan, I still only do a half-assed job of it. But my stakes are higher now. I don’t have to worry about the things that Percival should’ve worried about but they are important, First World Problems though they may be.  In my heart of hearts, I don’t take my own problems seriously enough because I know that compared to the rest of the world, what I’m shouldering is small potatoes. Maybe it’s a mistake to think that way. It’s some kind of guilt complex, I realize.  This is the way my mind works: “It’s silly to worry about worrying that you are making a big deal out of something that really is so silly when you think about the rest of the world.” Are you confused? Now you know why I drink a lot of wine. *sigh*

Headmaster Percival Chen is a proud Chinese-born man who runs an English language school at the cusp of the Viet Nam Conflict. In his refusal to accept his adopted country’s turbulent times, his gamble becomes a life-changer. Join From Left to Write on November 15 as we discuss The Headmaster’s Wager, by Vincent Lam. As a member, I received a copy of the book for review purposes.

7 thoughts on “Plan to Fail”