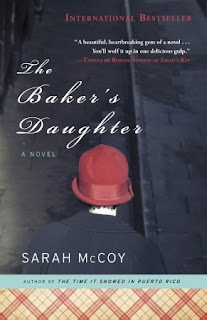 When I first began reading The Baker’s Daughter, I was struck right away by the realization that while I’ve read plenty of Holocaust literature, very little of it has been from the non-Jewish/non-Other perspective. The Holocaust seems to be one of those issues that is made out to be black and white, with no grey. Jew=good. German=bad. But few things in life are that simple. First of all, how about the fact that Jew and German often overlapped? Or the fact that Jews were merely a percentage of the total “Others” killed?

How much responsibility ought we place on a person that was emotionally vulnerable and easily brainwashed by propaganda, for whatever reason?  It takes a special measure of strength to go against the tide, especially one as violent and threatening as the Nazi tide. That is why it is imperative to shine more light on the Righteous Gentiles, especially the Germans. Not all those Righteous Gentiles started out as Righteous. Some probably unwittingly took up the cause when they came face to face with the human side of the Nazi campaign, as Elsie did in the book. Idealogy is easy to subscribe to when the details are abstract but when the victim of that ideaology takes on the face of a child, a mother, a father, looking you in the eyes and pleading, the human instinct kicks in, or at least, it did for some Gentiles.

I have a very good friend whose parents were born in Poland, and whose family still lives in Poland. Her family, along with others in their small Polish village, hid a Jewish schoolteacher during the war. (You can read that story here: http://www.tabletmag.com/jewish-arts-and-culture/books/107970/polish-village-secret). Another side of her family used to sneak bread under the fence to the Jews living in the Warsaw Ghetto.  As a Jew, I find it important to know these stories, to know that in the face of incredible inhumanity, there were brave, brave souls who risked life and limb (literally) to shelter and rescue the persecuted among them.

But the lessons of the Holocaust are not translating to the modern day. Darfur, Rwanda, Srebrenica, to name just a few of the genocides that have occurred worldwide since the end of World War II. We rally, we spread awareness, we donate money. But I hope there are righteous people on the ground who help those poor souls in a way that money and exposure cannot. I have to believe there are but where are those stories?


This post is inspired by Sarah McCoy‘s The Baker’s Daughter. In a small Texan town, Reba discovers Elsie’s German Bakery and falls in love with more than the pastries. She is drawn to Elsie’s life in Germany during the last year of WWII. Join From Left to Write on August 29  as we discuss The Baker’s Daughter. As a member, I received a copy of the book for review purposes. All links to the book are affiliate links. This means if you buy the book through my link, I get a percentage of the sale.