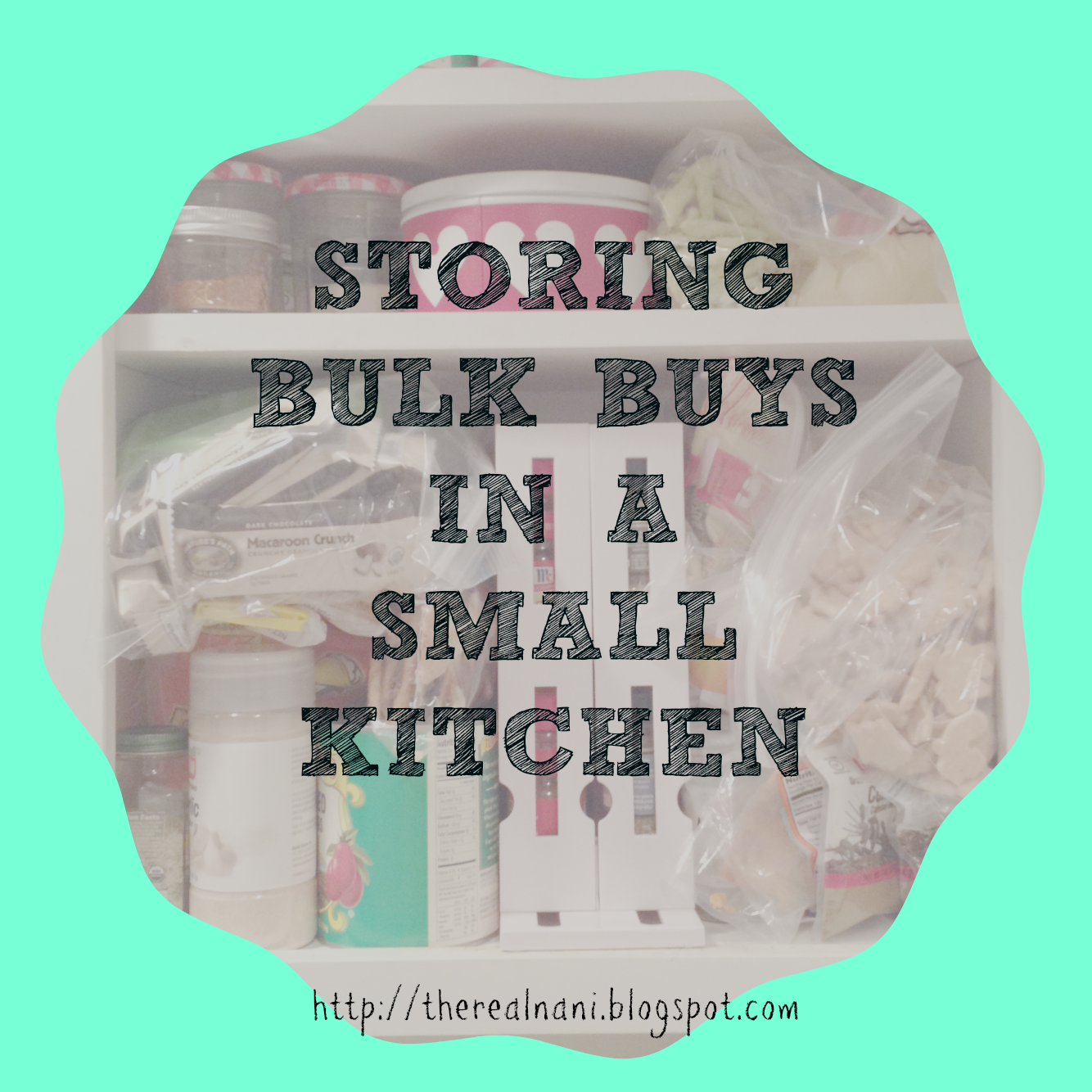 I only have three kids but I might as well be feeding an army. It took me an awful long time to understand why people shop at warehouse stores. That one little bag of Pirate’s Booty from the supermarket barely lasts the ten minutes it takes me to put the groceries away. In our old apartment, we had tons of cabinet space so shopping in bulk was no problem. In our little cottage, however, it is a different story. 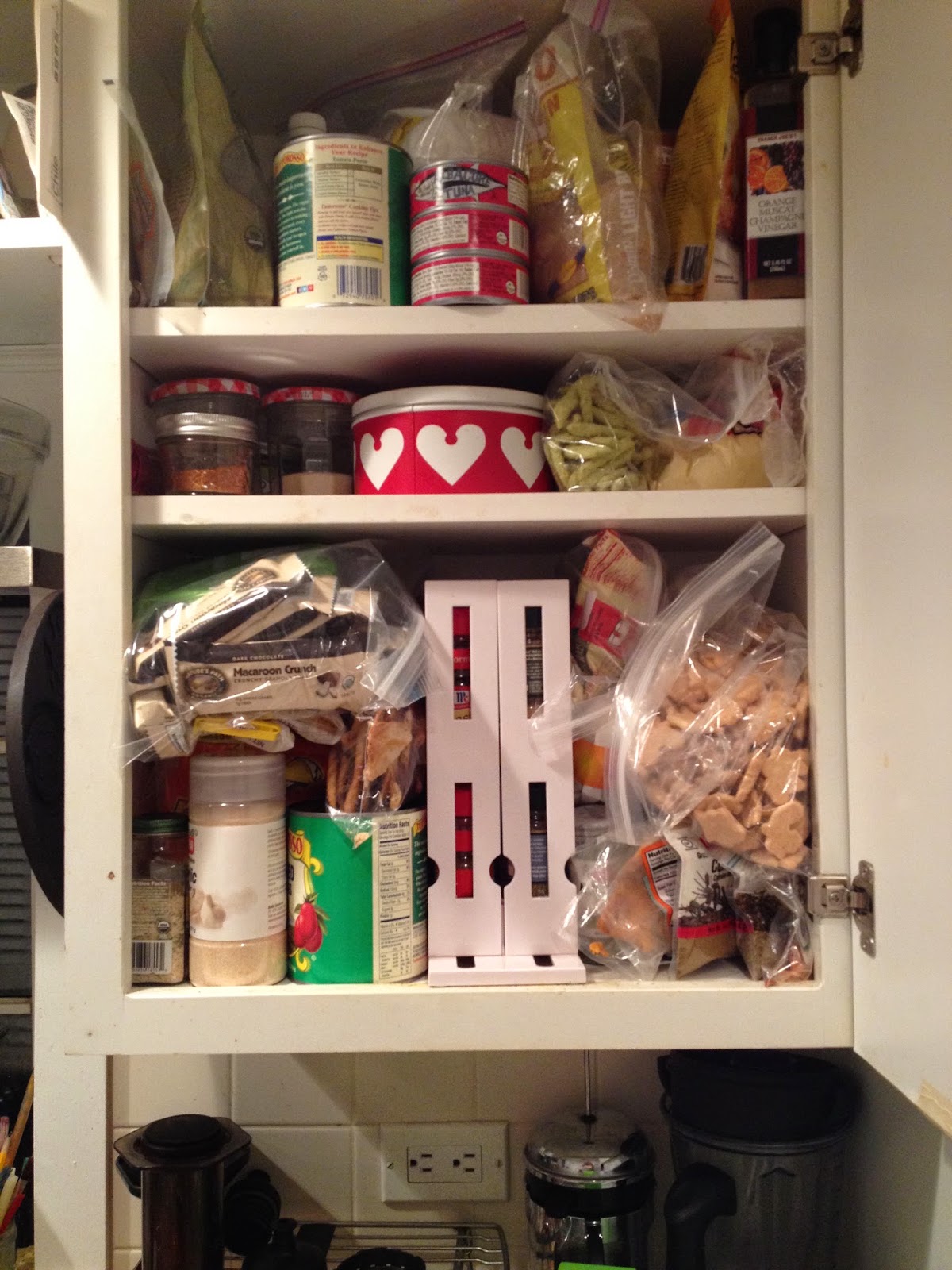 See this? This is my “pantry.” It’s all I’ve got…my one other cabinet holds our drinking glasses, small dishes and mixing bowls. I have a little shelf to the left of this cabinet where I put our bananas, and containers of spices.
So, I stopped buying in bulk. But I finally reached my breaking point this summer. Having the kids home all day, everyday meant that I couldn’t keep any food in the house–it was all flying out the kitchen in a day or two. Kids have a fast metabolism and since I try to keep my kids active, it’s inevitable that they’ll be hungry throughout the day. It’s annoying and expensive but I can’t blame them.
With the new school year rolling around, I knew I had to do something– besides the fact that I wanted snacks to last longer, I wanted to stop spending so much on them! If I was going back to warehouse shopping, I not only needed to make the food last for a month but I also needed a place to put all the stuff. And that’s when I decided that I would just ration the food, not just to make it last but to also get it to fit in this tiny cabinet (just barely, as you can see from the photo above).
I did not go to the warehouse and buy a jar of mayo big enough to last us ten years, nor do I ever buy anything fresh there (gross…).  I stuck strictly to snacks for the lunchbox and for after school. I bought a giant thing of raisins, snap pea crisps, granola bars, trail mix, rice rolls, and animal crackers.
When I got home, I calculated how many servings I could dole out every week to make it last all month by dividing the number of servings by four, then doubling or tripling that amount to account for each kid, each week. So, what you see in the ziplock bags above is one weeks’ worth of each kind of snack. The trail mix is a hot commodity and would disappear in seconds if the kids had unfettered access to it. Because of that, I divided the servings of trail mix into two ziplock bags, and labeled each one with the girls’ names. I told Alice and Stella that they could have as much trail mix as they wanted but if they ran out before the coming weekend, too bad! They’d have to wait before I would refill the bags.
After sorting a weeks’ worth of snacks, I put the packages of food into a storage bin that lives in my laundry room-slash-utility closet-slash-supply closet off the kitchen. (The animal crackers came in a huge plastic container so I transferred those to ziplock bags.) 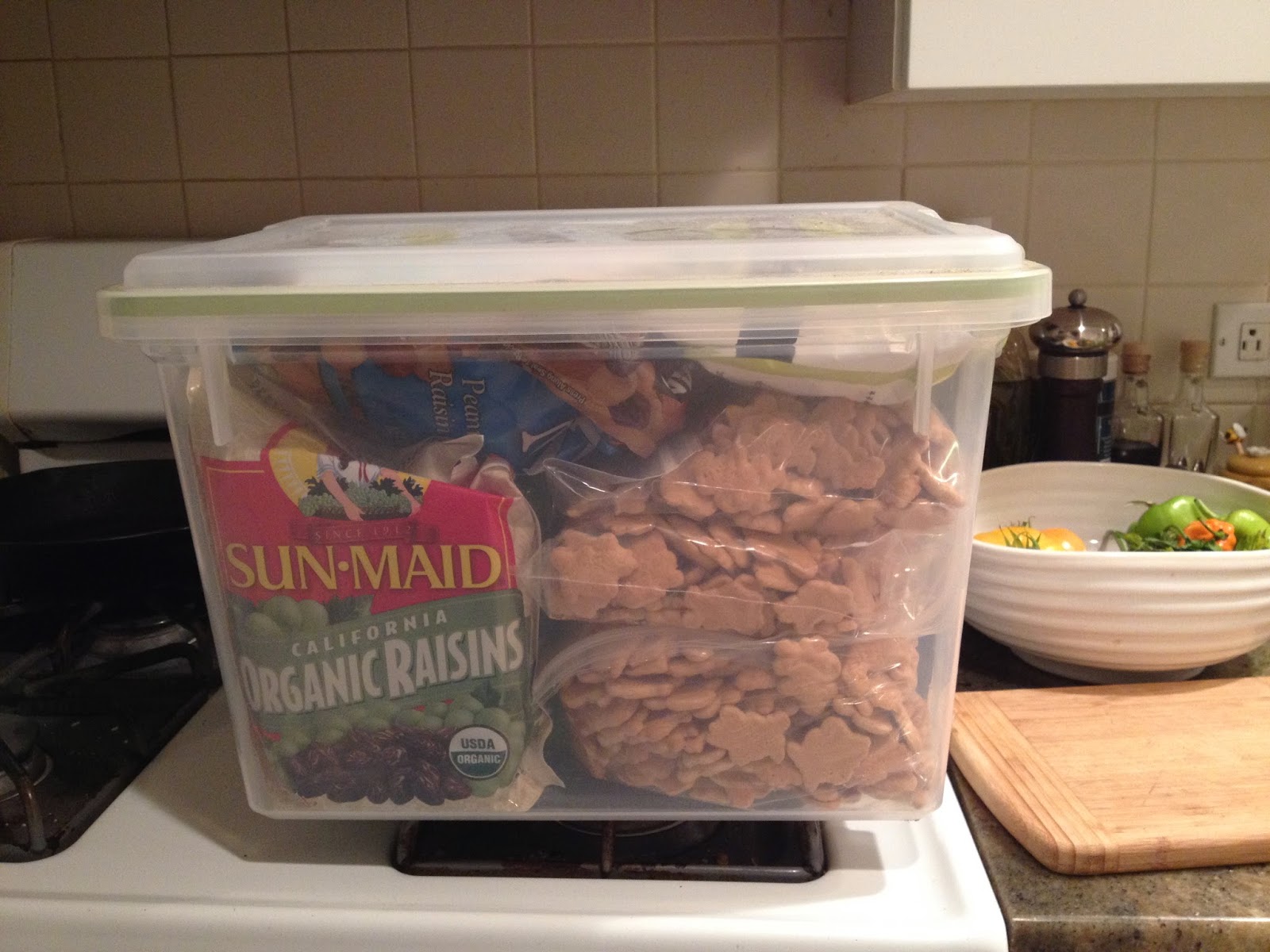 We’re entering the first week of school for both kids (Alice started last week, Stella starts Wednesday), so we’ll see how it goes. I have high hopes that my little experiment will work because I am not going to the warehouse more than once a month. In a similar vein, I plan to avoid the grocery store until this coming weekend. Menu Mondays will return next week, but after a summer of not really planning out meals, I’m really sick of running to the store every couple of days– it’s terrible for the wallet, too!

6 thoughts on “Short on Space, Long on Hungry Kids: Storing Bulk Buys in a Small Kitchen”