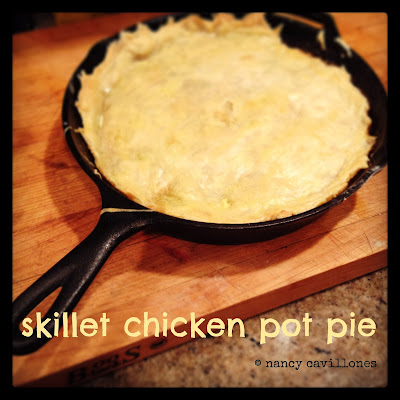 Chicken pot pie might be the ultimate comfort food– filling without being too heavy, creamy, and carb-a-licious. It’s also a great way to use up languishing veggies, though I made a classic version here. And the skillet? Well, I used to have a Corningware round casserole but I probably gave it away when we moved into our rental, because of the teeny-tiny kitchen with limited storage. I’ve made do with just a few essentials and one of them is this skillet. I wish it were bigger, but it has served me well! My idea was to make a one-pot chicken pot pie, quick and easy, because three kids really starts to feel like THREE KIDS when the witching hour arrives. I googled around for inspiration, knowing that a skillet pot pie could not possibly be an original idea. A lot of the recipes required various pots and pans, but I eschewed all that in favor of making everything in one skillet. Report from the 5 year old: “I like the chicken pot pie. Can I have more, but with no crust?” The crust, by the way, is delicious but I happened to have given birth to a kid that doesn’t really like carbs. [I don’t know how that happened…]

serves a hungry family of 4, with leftovers for lunch
Ingredients: 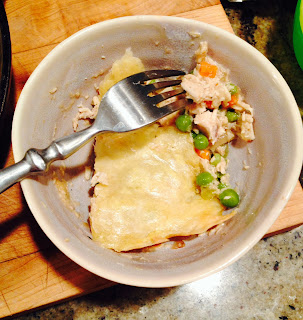